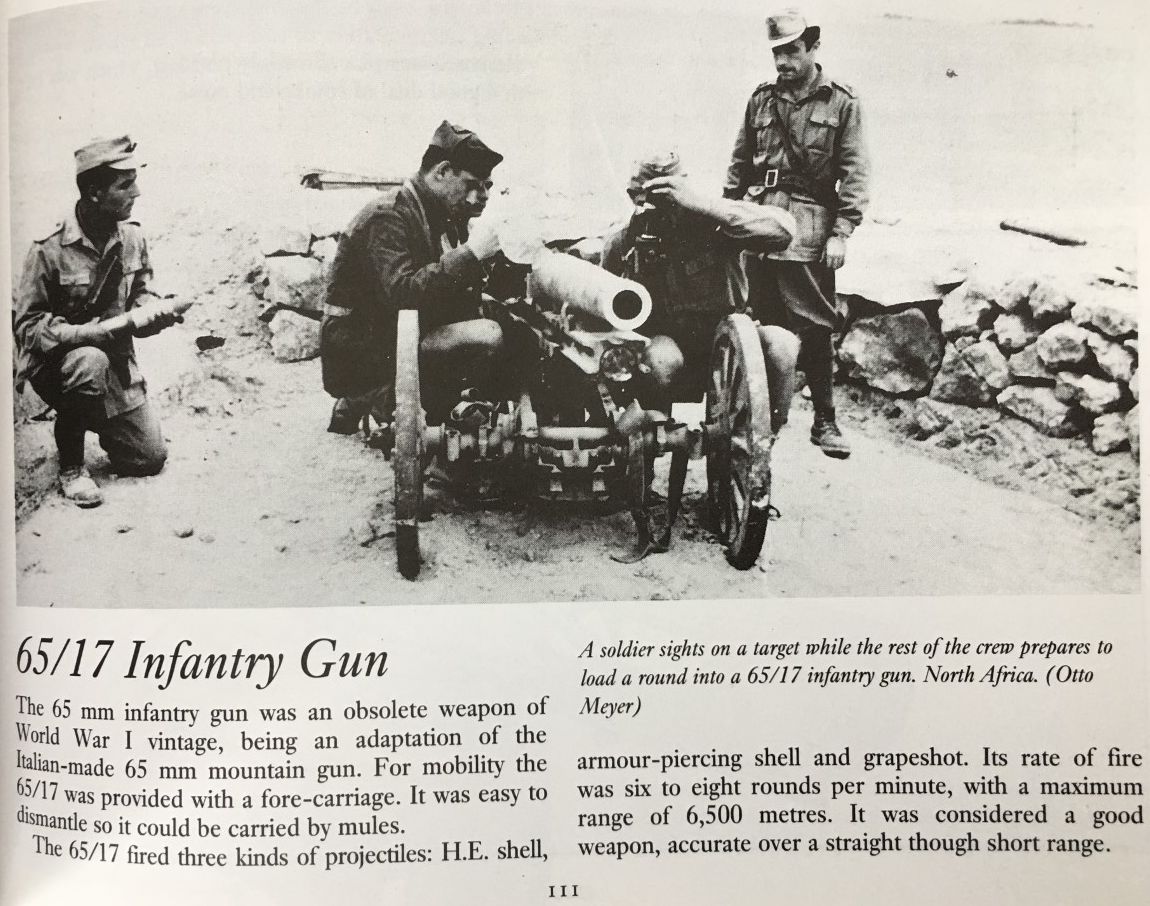 Has anyone got any information of any quality about the penetration capabilities of 47mm, 65mm & 75mm EP please.
Click to expand...

Anyone have the penetration of a 12.7mm Breda?

It’s interesting that the 65/17 would have better armor penetration, presumably it’s a longer shell?
W

it says the Italians had a HEAT round ('Effeto Pronto') for the 65/17 Infantry Gun which could penetrate 120mm of vertical armour at 100m. Since a short German 75mm gun only penetrates 100mm at the same distance I'm suspicious.
Click to expand...

So I just now checked. Using Mass x Velicity = Impact, the 75/32 hits 2.6 times harder than the 65/17. Either the 65/17 had quite the shell or Neil has a point and we should be suspicious. Even though two different sources give high performance to the 65/17, that's a lot of difference. I do a lot of wargaming and can usually calculate how many guns of what caliber were on a battlefield through November 1942 and I have never once found a 65/17 in an anti-tank role. Of course, the shell itself did not come out until April,1942, was probably produced in minimal quantity, and maybe the ship they put them on got sunk or they were sitting in crates in Tripoli.

Ignoring Wakefield's "suspicion" and your pointing out the problem, my first assumption of why I didn't see it in gaming was that the 65/17 wasn't accurate enough to hit a tank at 500 meters and for which reason it served as a frontline infantry support gun. It might have been present at second El Alamein as the date is right and the Italians did very well there and it could destroy a British Mk III, Mk VI, US M3, and maybe a Sherman. But, otherwise - no - I can't see this gun doing this.
Last edited: Oct 28, 2021

HEAT rounds don’t care how fast they’re going all they have to do is hit the target, it is possible that it had a greater penetration, you can just look at the evolution of German 7.5 cm HEAT rounds performance during the war, early rounds did around 52 mm and later ones managed 115 mm as I recall, all for the same gun the 7.5 cm KwK 37 L24, Interestingly enough the guns have similar muzzle velocity and ranges, it certainly seems possible that it was used to engage tanks at that range, 500 m, and there are references for it being used in that role and there were certainly several of them in various units TOE’s.
Last edited: Oct 28, 2021
W

You are correct that the EP (Effect Pronto) shaped hollow charge does not rely on kinetic energy. However, I don't believe the EP is a HEAT round. EP has a "splatter" effect on armor more similar to HESH. My mistake in thinking more kinetic energy equals more "splatter". Thanks for that correction. The 65/17 didn't fire EPS.